There are about 20 different species of nematode parasites of sheep commonly found in the UK. Pathogenicity varies with species, the numbers of nematodes present as well as host factors such as the age of the sheep (maturity), nutritional status and body condition – and there is more about this in the SCOPS Technical Manual.

The lifecycle of most of the gastrointestinal nematodes are similar to the one in the diagram below. There are one or two exceptions such as nematodirus. 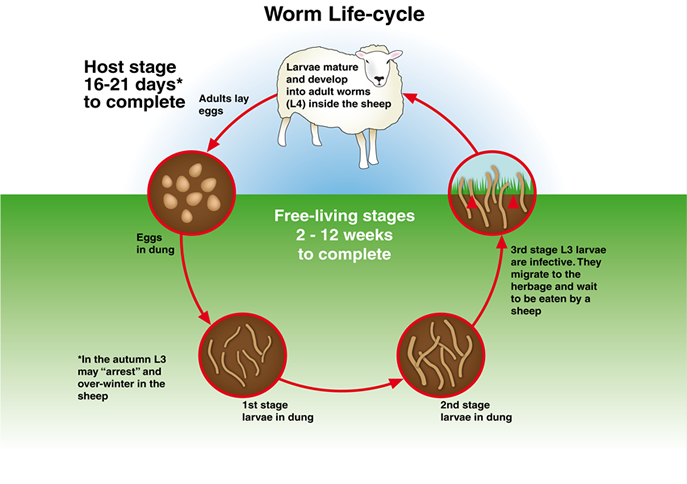 Adult female worms in the sheep lay eggs that pass out in the dung and hatch. Each egg releases one first-stage larva (L1) and these then develop and moult to second stage larvae (L2). Both of these stages remain in the dung feeding on bacteria. At the second moult the third stage (L3) appear and these are the ‘infective’ larvae that migrate onto the herbage where they are ingested by grazing sheep. Once ingested they enter the wall of the stomach or intestines and develop into fourth stage larvae (L4) and then, about 14 days later, become mature adult worms. The prepatent period (time between the L3s being eaten by the sheep and the appearance of eggs in the dung) is normally 16-21 days. There is no multiplication of worms within the sheep and the lifecycle is direct (i.e. there is no intermediate host). Adult worms that are not expelled by the immune system of the sheep or killed by anthelmintics can remain viable within the sheep for several months before dying naturally.