Use of the two newer wormer groups (4-AD orange and 5-SI purple) has doubled in the two years since they became available through SQPs at merchants, but sheep farmers could still harness their potential more.

That is the message from the Sustainable Control of Parasites in Sheep (SCOPS) group, which has campaigned hard to encourage sheep farmers to carefully integrate the two newer groups into their worm control programmes.

Speaking on behalf of the group, Lesley Stubbings says: “It’s great news that we have more than doubled the number of doses of the newer wormer products used in the UK. This means many more flocks are harnessing the potential these products have to slow the development of resistance and improve late season lamb growth rates. It also means fears they would be used too widely when the classification changed were unfounded. We now need to push to get even more flocks adopting one of the groups as a one-off annual dose and part of their quarantine treatments.”

Integrating the two newer groups into on-farm worming strategies will help slow resistance to the older groups, keeping them working for longer, SCOPS says. In the long term this means cheaper, effective worm control compared with the dangerous prospect of having to rely on the newer groups completely. Not only would that be very expensive, but if the newer groups become the only treatment option then resistance to those would increase rapidly.

As well as being an important option for quarantine treatment of incoming stock in the autumn, SCOPS recommends that either of the two newer wormers are used as a ‘mid-season’ or ‘break drench’ to remove worms that have survived prolonged exposure to other wormer groups used earlier in the season.

Ms Stubbings says: “To get the most out of this one-off annual drench it is important to use it in the latter part of the grazing season. The objective is to remove worms that have survived previous treatments with one or more of the older groups (1-BZ white, 2-LV yellow and 3-ML clear). This helps slow the development of resistance to these three groups, with the double benefit that killing the build-up of worms surviving in the lambs will boost performance.

“This treatment may be around the time of weaning, but it does depend on what grazing lambs are going onto and whether they will need subsequent treatments. Remember the aim is to remove the build-up of worms, so leaving this until a bit later in the summer might be the best option to reap the biggest benefits.”

Farmers need to drench all their remaining lambs when doing this annual dose with one of the newer groups.

“This is different to the normal SCOPS advice,” warns Mrs Stubbings. “Normally we would leave the biggest or fittest lambs untreated when using the older groups of wormers.

“Remember, the job of this dose is to slow resistance, rather than just treating the lambs. You must not ‘dose and move’ lambs to grazing with little or no worm burden straight away, or you will encourage resistance to these wormers. The practical way to avoid this is simply to drench lambs, return them to the same fields and then move them after four or five days. This makes sure they will pick up a few untreated worms to take with them.”

She adds: “A mid/late-season dose and quarantine treatments are the recommended times to use these newer products. Never use them in ewes or at other times without detailed advice from your vet.”

Vets, SQPs and pharmacists can prescribe the group 4 (4-AD orange) product to farmers. Currently group 5 (5-SI purple) is only available via your vet, due to supply issues. 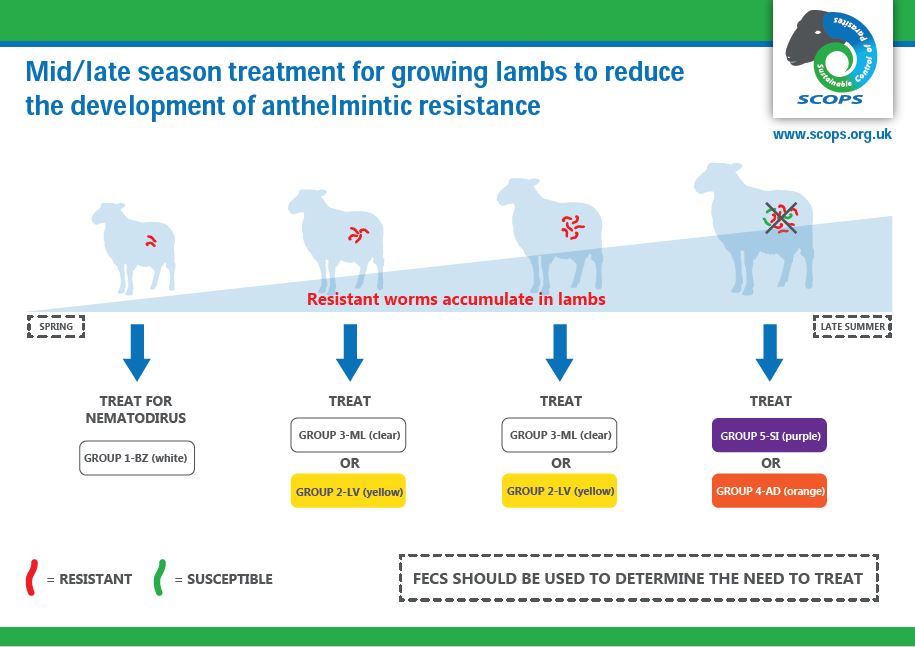